Surrounded by Venetian-era buildings, inhabited by a variegated population of holidaymakers, and filled with palm trees, lemon trees, and restaurant and café tables, the small piazza in front of the ferry port of Salò could not be more charming.

Here, a bistro in a 20th-century building has been renovated with a seventies-inspired look and a fashionable but sophisticated bill of fare.

The restaurant was completely redesigned, with a new spatial articulation, a meticulous lighting project, and a carefully planned menu.

The interior is a chromatic tribute that envelops us in a style that aims to astonish. Bright polished surfaces contrast with intriguing combinations of colors and materials, including black and peacock blue enamels, acid-etched brass, and velvets in unusual colors such as pumpkin or greige.

The most surprising element is the flooring. Consisting of large concentric circles formed by tesserae in Botticino marble with black grout, it gives the interiors an ebullient, unpredictable effect.

The large bar in the center of the space features a base in contoured wood, painted peacock blue, and acid-finished brass details. An overhanging structure supports a delightful composition of artfully arranged bottles, plants, and other objects.

Comfortable padded stools invite patrons to sit down anywhere along the bar to drink or dine in a convivial atmosphere.

The wall coverings, in irregular rectangles of burlap, painted in an unusual palette of muddy tones, give the environment a unified, decisive personality, while the lighting by Viabuzzino enhances the contrasts between the soft general lighting and the highlighted focal points.

Tables in wood and black marble and chairs in dark curved wood, some with woven cane seats, line the walls in an intimate, harmonious manner.

Against one wall, a sofa in pumpkin-colored velvet, flanked by a pair of ‘70s armchairs, gives a surprisingly homey feel.

With its shiny metal surfaces and custom wall finishes, the kitchen is open to view, further enhancing the informal sense of welcome that emerges throughout the space while at the same time accentuating its expressiveness. 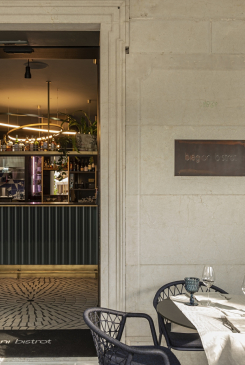 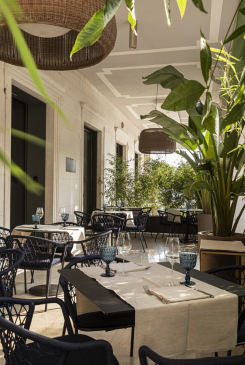 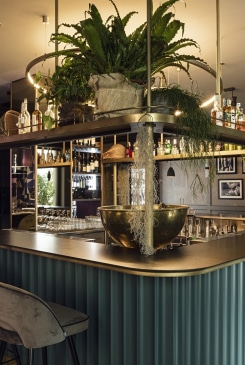 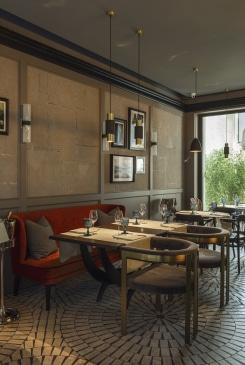 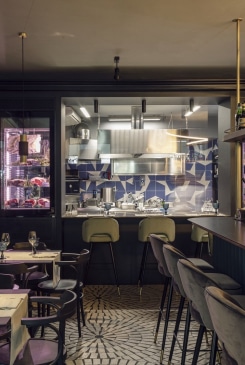 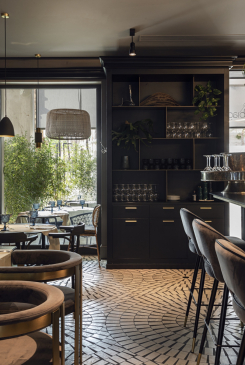 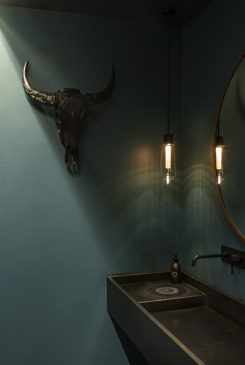